The Day That God Died 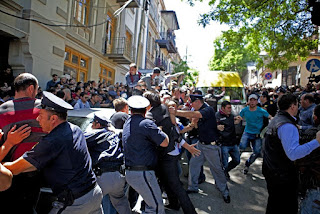 First, I heard the roar. It sounded like thunder. It was increasing so rapidly, I wondered, what could it be. And then I saw one of my friends running frantically.   I gestured “what?” and he yelled: “run, run, quickly, run!”
I ran. I took my aunt’s hand and ran towards the museum of arts (even before the rally, I decided that in case danger, I would take a shelter in some building; museum had security). All the other activists ran left.
And then… the mob, the river of people, running and yelling, literally flooding the freedom square, in minutes, in seconds, with sticks, with chairs, with hate and that sound, that horrible roar. It reminded me of a crazy antelope stampede scene from the Lion King. And they were ready to kill Mufasa, oh yes they were.
The museum security locked the door.
It took all my courage not to break into sobs. I called my friend who was late and screamed for her to stay where she was. I couldn’t see what happened to other activists. I imagined that they climbed the pedestal and was about to join them when I saw pedestal people waving ’s old flag. I stopped. I shuddered. My friends would never wave that burgundy-colored symbol.
Out of the window, I watched embassy people leaving in the buses. The late girl finally called and met me. We talked in English, cause had to walk through that mob to get to hubby’s brother’s car.
Fear left me then. Anger came. They did it, they ruined our peaceful rally! 10 000 of them were ready to squish the 50 of us under their feet, full of hate, full of anger. They would not allow us to stand in colorful t-shirts for 10 minutes in a silent rally commemorating all the victims of homophobia. They turned us into the victims of homophobia! They turned us into the victims of homophobia! Damn them! Damn them!
After anger, fear returned. On my TV screen, I watched buses full of my friends attacked by uncontrollable mob. I watched them forcefully opening the door. I watched them climb on top of it. I remembered everyone who ran towards the buses, everyone who ran left. Can you imagine how they felt, squatting down to avoid bus windows, shaking, with no control, surrounded by mob, surrounded by angry clergy that tried to flip the bus?!
Thankfully, no one received serious injuries.
Now, I don’t feel anything. I am very tired. I am exhausted.
Now, there is nothing left to loose.
God died in today. His “servants” killed him.
And now, they’re singing of his death in their gold-encrusted Sameba church.
P.S. The pic source:http://liberali.ge/ge/liberali/articles/114836/
Posted by pasumonok at 8:50 AM

pasumonok
I am trying to be:a friend, a lover, a housewife, a pet owner, a future parent, a psychologist, a writer, a liberal, a spiritual person, a film lover, a well-read nerd,a fashionable woman,an independent woman,a good cook,an eye candy, and so on and so on.And also...I am trying not to sound like a snob :-)